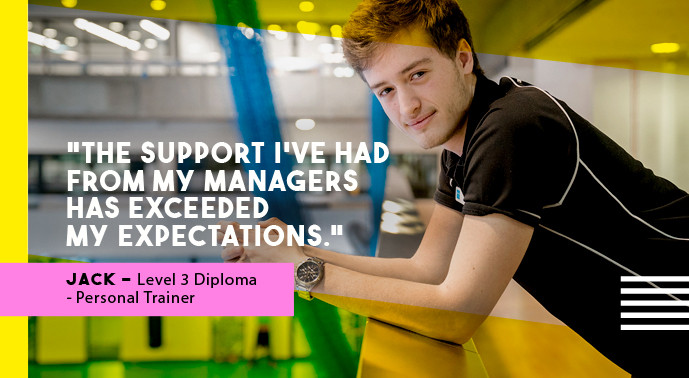 Jack from Ealing started his apprenticeship with us last November.  Having completed his Level 3 BTEC in ‘Sport and Exercise Science’ at college, Jack began looking for an apprenticeship that would give him access to the fitness industry – he found us!

What was your dream growing up?

I’ve always had three dreams - a professional footballer, an aviation geek (I love flying and planes!) and to work in a gym. When I was younger, I was the scrawniest, smallest kid in the class before growing into a tall, skinny, lanky lad. I’ve always been a fussy eater so I’ve had to force food down myself to gain weight. I’m now in a good place with my body.

Tell me more about your passion for football

I was interested in football as soon as I was born! I got into my first football training academy at 13 and later trained at QPR’s football academy. I support my local team, QPR, but my dad raised me to be an Arsenal supporter. I gradually realised that I didn’t have to follow my dad’s rules! I’m semi-professional now and have been playing for Oxhey Jets near Watford for about five months.

I didn’t always apply myself to pure studying and I struggled through college. I thought I would enjoy working more rather than going to university. I can always try university later.

Why do your apprenticeship with the YMCA Club?

I like the fact that Central YMCA is the world’s first YMCA. It’s an award winning club with brand new studios. Everything is here.

With a YMCA Club apprenticeship, I will gain my Level 3 Personal Trainer qualification and they have paid for my National Pool Lifeguard Qualification too.

Given that I’m from a Catholic family, YMCA’s Christian ethos also resonated with what I was brought up with.

Teaching and covering classes. I practice the classes a lot, because as an instructor, I have to practice what I preach. There’s a lot of exercises and computer work!

When I’m not running classes, I’m interacting with gym members as much as I can. I also arrange inductions with new members or existing ones who want a change of regime.

At weekends, I’m by the poolside. The other day, we had a ‘Code 4’ (a medical emergency) - a lady fainted when she came out of the sauna. I was in the cycle studio when I heard “Code 4 to poolside!” I dropped everything and ran up the stairs as fast as I could. As my two Lifeguard colleagues helped her to recover, I helped lifeguard the pool in case anything else happened. She’s ok now.

Has it been a good experience?

It’s exceeded my expectations because of the amount of training and qualifications I’ve gained. The support I’ve received from the members and my managers, Ed and Hamit, has been huge. One Club member even said to me: “As soon as you qualify as a Personal Trainer, I want to be your first client!” If I want to move forward within the YMCA, my managers will support me and help me to get into the right mindset.

What have you enjoyed the most?

The diversity and the environment – everyone is so friendly and no member is the same. In central London, where else would you find a gym that’s this big and this open? You can walk up to anyone and have a random conversation about how their day is going. I love interacting with so many different personalities. It’s great!

What has been the most challenging?

For me, studying has been the most challenging. Also, when I taught my first circuit class last November, I was trembling, but now I’ve found my stride and I’m skipping along. Now people love it.

What skills have you learnt?

I’ve learnt so many different skills. I’ve matured a lot since college. I used to get into a lot of trouble with teachers. I wouldn’t do as I was told unless it was practical and I was allowed to run around. I got a lot of detentions - I was rebellious.

I think I was trying to find myself, but as soon as I graduated and entered into the working world, I had to knuckle down or I wasn’t going to last anywhere. When I came to the YMCA Club, I matured and never looked back. Everyone now thinks I’m older than 19.

I’ve definitely learnt communication skills and how to approach people.

What’s your proudest achievement during your YMCA apprenticeship?

Getting the Les ?Mills GRIT Instructor qualification, which is a worldwide brand.

What’s next for you?

After I qualify as a Personal Trainer, I’m off to Camp America in June for about five months where I’ll be working on their weight loss programme. At the same time, I’ll also be having a trial for a professional American football team.

What would you say to people who are considering doing a YMCA apprenticeship?

There are so many reasons to do an apprenticeship. You gain a qualification that lasts a lifetime and you’re working in the real world. With me and Personal Training, I’m working in a gym – an environment where I’ve gained first-hand experience rather than paying for a PT qualification, which costs around £2,000. If I had gained that qualification and applied for a PT job, they would ask me about my industry experience and all I could say is, “none!”

If you need a qualification to get you where you want to be, why not do an apprenticeship which pays for your qualification, pays you at the same time and gives you first-hand industry experience?

My PT qualification is a worldwide recognised qualification. I have American citizenship because of my mum, so I could either be a PT in the UK or in America – maybe I’ll work in Hollywood and be a PT for the stars!