Prostate Cancer - “I was lucky they caught it early” 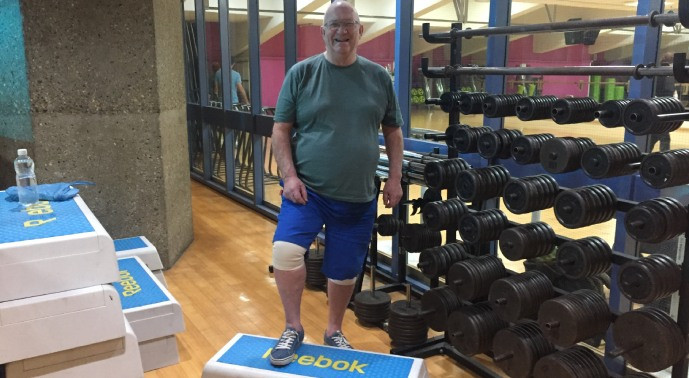 As thousands of people around the globe sport a moustache this November to raise money for men’s health movement, Movember, we catch up with Club member, Bob Young, who has survived prostate cancer. Bob shares his difficult journey and how the YMCA Club has helped him during his recovery…

Married father-of-two, Bob, is no stranger to the YMCA Club. He was first referred to us nine years ago following a heart attack at the age of 62. Five-and-a-half years ago, after which Bob was treated for prostate cancer, he was referred to us once again by Macmillan Cancer Support to undergo a six to eight week recovery programme. Eventually Bob became a member of the Club’s Older Adults group and hasn’t looked back.

“I didn’t feel right one day so I made an appointment with my doctor who gave me a blood test and sent me down to University College Hospital. They put me on about four different machines and said I had prostate cancer.

For the biopsy, I was strapped down. A 12 inch needle with a jaw on the end was inserted between my bum and balls. The pain was nothing like I expected. I thought they would give me an epidural, but because of my medical history, they told me they would get a better sample without one. They put a camera up there at the same time. I was screaming and crying. It took about two hours with six medical staff.”

Please note that this is Bob's personal experience only and not all men experience this level of pain during a biopsy. According to Prostate Cancer UK, there are different types of biopsies and different levels of anaesthetic. Some men only experience a slight discomfort, whereas others find it more painful like Bob. You can read more about prostate biopsies and their side effects here.

Due to Bob’s heart condition, there was a risk of him not surviving any surgery to remove the cancer, so he underwent radiotherapy, twelve inch injections in his stomach and took medication instead.

“I didn’t want to do it anymore”

For the next six weeks, his treatment at hospital was gruelling:

“The machine bit was easy. It was nothing at first, but then the side effects from the drugs and needles in my belly hit me. After two weeks, the treatment kicked in and boy was I was in a lot of pain. One Saturday, I cried for about five hours because I was in so much pain.”

I had hallucinations - like my family falling over a cliff edge. I would wake up soaked in sweat. My head was floating and I couldn’t hold my head up. I used to lay in the dark. It knocked me sideways. I was in another world - It made me crazy. I couldn’t handle it. I didn’t want to do it anymore, but they said if I didn’t finish it, I’d have to do it all over again. I was tearing my hair out, but I did it in the end.”

The injections stopped two years ago. To protect the body against the cancer, it will take about five years for the treatment to leave Bob’s body.

A change of lifestyle

No one knows exactly what causes prostate cancer, but according to the NHS, research suggests that there may be a link between obesity and prostate cancer. A balanced diet and regular exercise may lower a man’s risk of developing the disease.

Former builder, Bob, admits his diet was unhealthy in his former days and he was no stranger to cafes, fry-ups and eating late at night:

“My diet was bad. I used to go to a lot of cafes for a full English breakfast. I’d eat six or eight fry-ups a week (breakfast and / or dinner). I used to eat chips walking along the road and biscuits with my tea. If there was a fish shop where we worked, we’d get fish and chips, if there was a McDonalds, we’d go to McDonalds. If I had my life all over again, I would change what I would eat.”

On medical advice, Bob has cut out greasy food, sugar in his tea and has drastically reduced his intake of pie and mash and fish and chips. He now eats brown bread and loves peas, carrots and cauliflower! Now he finishes his dinner by 6.30pm, way before his bedtime.

“Coming to the Club helps me to live longer”

In terms of fitness, the Older Adults group every Wednesday, has certainly improved his mobility, flexibility and stamina. A variety of regular exercises has helped him to maintain his independence:

“Coming to the Club has improved my life and helps me to live longer. I’ve got some go left in me, but the Club has given me more help. I used to stop five or six times to get somewhere, but now I only stop three times. After my prostate cancer treatment, I used to feel like a two, now I feel like a seven or eight.

I used to think fitness and nutrition were a waste of time, but I’ve learnt. I tell my mates to come to the Club. Now I’ve got myself a better life. The physio we do also does us the world of good. My movement has also improved. I don’t want you to do something for me, I want to do something for you.”

“Although they’ve got all the top facilities going, it’s the people here that make this Club. The people who run it are nice. There are members here who are a lot older than me in their 80s and 90s - they seem to have quite a bit of life left in them! We go out for a meal about once a month together. I would recommend it to anyone.”

Bob is not totally clear of prostate cancer, but it is totally under control and is managing to live with the disease:

“I’ve had blood tests, they’ve checked my prostate and it’s holding its own. My PSA level (prostate-specific-antigen) has gone down and I’m really pleased with my prostate.”

To mark Movember in the Club, any member throughout the month of November can bring a male friend to the Club for free, for one day only.

Your friend – accompanied by you on entry - will have free use of all facilities, pool and classes on the day you both arrive.

On arrival, please report to Club Reception with your friend,