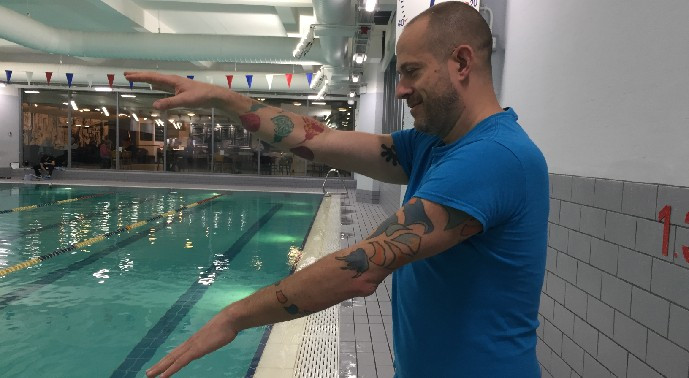 Marc is a recently qualified Swimming Teacher who volunteers at the YMCA’s award winning Positive Strokes Swimming Club. Positive Strokes is part of Positive Health, which has been helping people living with HIV, keep fit, since 1997. When Marc first joined six years ago, he was at a real low point, but thanks to its nurturing environment, he’s turned his life around and now giving back to the cause he’s most passionate about.

Positive Strokes, which was established in 2015, is entirely run by volunteers like Marc and takes place in the YMCA Club’s pool every Friday. It comprises of three groups - beginners, intermediate and advanced.

It currently has around 30 members – men and women from different areas, all ages, all walks of life and varied swimming ability who are living with HIV. Some are recently coming to terms with their new diagnosis and others have been living with HIV for many years. Whatever their background or ability, Positive Strokes aims to help people feel good about themselves in a stigma-free environment.

Positive Strokes’ phenomenal work was recognised in 2017 when it won the ‘David Sparkes Award’ during the Swim England National Awards. Several swimmers from the club have even taken part in international competitions and have come back with medals. Today, Marc is proud to be part of its success, but there were times in his life when his confidence hit rock bottom.

“My lowest point was having to hide it from everybody”

Marc was diagnosed with HIV 25 years ago as a young professional in his twenties. As an ambitious full-time Account Manager in the financial sector, he felt unable to talk about what he was going through:

“I hated hiding, but I couldn’t come out in the environment I was in. I had already come out as a gay man which was very stressful, but to come out again 25 years ago with this huge thing was a big deal. I couldn’t talk about it. Juggling hospital appointments, medication, managing a new regime and a busy working life, while not being able to talk to anybody, was really difficult.

I’m not saying they wouldn’t have accepted it, but you don’t want to be treated differently. You want the same opportunities as everybody else, so you keep it a secret. I managed to cope, but a lot of people can’t. Luckily, I was never that sick, but a lot of people I know were very sick and only had a few weeks or months to live. Some of my friends died.”

Although this was a difficult time, six years ago Marc hit another low when he was made redundant and his relationship broke down. After 21 years in the same job, it was a big shock. He decided to go travelling for a year across South America, which was a great experience, but when he got back, he broke up with his partner:

“I had a terrible break-up and I was out of work for a good three years. I went through a very rough time and I was in a dark place. When we broke up, I didn’t really do anything - I just wasted my time and went down a route which wasn’t very pleasant. I was hanging out with the wrong people, doing the wrong things and I wasn’t looking after myself. I was doing things for everybody else and completely forgot what my needs were - I woke up one day and didn’t even know what music I liked anymore. I lost myself.”

The only way is up!

Like all Positive Health members, Marc was referred by his HIV doctor. He’d always been sporty and used to play a lot of basketball, badminton and tennis. He used to love snowboarding too but due to a back injury caused by degenerative discs, he had to stop all impact sports. After several operations, he became less agile and needed a new way of keeping fit. He wasn’t keen on the gym so he gave swimming a go:

“I wanted to feel good about myself, get fitter again and become more sociable because I had become a recluse. I tried a swimming lesson and loved it! It opened up new horizons for me – it was a re-birth really and Fridays became my focus point. I really looked forward to my swimming lessons – it was the nice thing that happened to me during the week. Little by little, I felt better about myself, became more sociable and met more people. The Teachers at Positive Strokes were so encouraging, positive and motivating - I'm so grateful to them for helping me find my way.”

Not the death sentence it once was

Although HIV is no longer the death sentence that was once widely reported in the 1980s, living with HIV still has its challenges. Depending on individual virus levels in the blood, people still have a weak immune system so might be more prone to infection such as pneumonia.

“You have to get used to a new regime which may not agree with you. The side effects include dizziness, nausea, vomiting, diarrhoea or numbness. Every time you have to change drugs it can be stressful because you’re narrowing your options. Although there are new drugs available, if you try them and become resistant to all of them, you feel stuck..”

Also, there is still some stigma attached to the virus so many people don’t feel comfortable talking about their status at work or with their friends or family:

“They’re still kind of closeted in a way. There’s still a negative image of people who are HIV+. Some people tend to think you’re weaker or you’re in ill health or you might be needy or have mental health issues. We might need help occasionally, but we’re not in the situation where we can’t do stuff. We can be perfectly sporty and do as much exercise as we want and be HIV+. Many of us enter international competitions and win medals. We can be as good as anybody else. Yes, we take a lot of medication and we may have some health issues, but it doesn’t mean we can’t flourish like anybody else.”

Positive Strokes empowers people living with HIV to talk about their treatment and how they feel. No one has to hide – they feel liberated and their self-confidence grows. It enables them to get back into exercise when they thought exercise just wasn’t for them. For people who don’t really know who to turn to, a social and active club like Positive Strokes can be hugely beneficial.

“I love the fact that I can give something back”

Marc admits that his former career was all-consuming, leaving little time for others. Now having broken free from the shackles of the corporate world, Marc – originally from Switzerland - now teaches part-time, which enables him to volunteer at Positive Strokes every Friday. He takes great pleasure in seeing others progress:

“When my career suddenly stopped, I started to see all sorts of people – I saw another world. At Positive Strokes, I meet people who I wouldn’t have met before who have a completely different lifestyle and quality of life to me - these are real people. I wanted to give back because Positive Strokes gave me a lot. It was what I needed at that time and they helped me to get out of the hole I was stuck in. I don’t think I would be in the happy space that I’m in now without Positive Strokes.

I’ve seen incredible results - I love seeing the transformation in our swimmers. We have some men and women who are so scared of water and then six months down the line, they can do several lengths and can swim freely – it’s really gratifying. They feel much better about themselves - their health, fitness and overall wellbeing is improving. I never thought I would be a qualified Swimming Teacher – it hadn’t crossed my mind before. I couldn’t be happier doing it. I’m going to carry on volunteering here because I love doing it.”