“Everyone goes on a journey together” 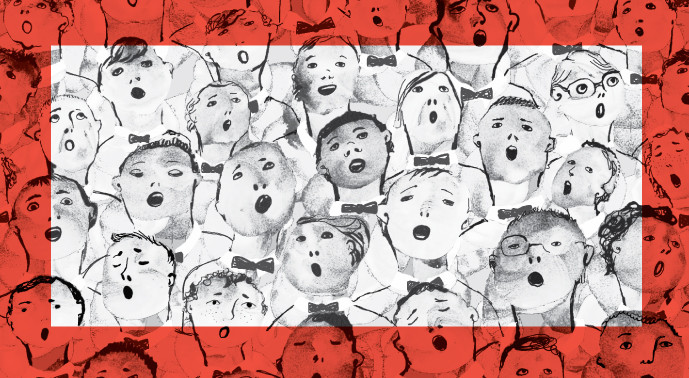 The YMCA Choir is back and bigger than ever. Over thirty people gathered in Keith Clarke Room 1 last month to sing under the listening ear of Choirmaster, Kieran Jones, who’s worked with the prestigious Royal Philharmonic Orchestra and London’s Royal College of Music. Kieran and choir member, Marion, explain what’s so satisfying about singing together…

“Making a lot of beautiful noise”

Kieran from Wales has loved choral music for as long as he can remember:

“I grew up in singing in choirs and I just loved choral music. It’s something that has always been a passion of mine. I’ve been conducting choirs since university in 2012. Pretty much all of my musical life I have been involved in ensembles and choirs.”

Marion, who has been a volunteer cook at the YMCA Club for the last 15 years, loves to sing:

“Singing is so joyful. It’s incredibly good for your mental and physical health. It’s great getting together with a group of people and making a lot of beautiful noise. Singing is so calming and liberating. It doesn’t matter what you sound like. Everybody should do it.”

Less about perfection, more about community

But what if you’re tone deaf or can only muster a squeal? Many people often assume that you need to have a certain level of singing ability before joining a choir. Not so at the YMCA Club – Kieran explains why:

“Our type of choir is not artistically driven. Although we’re trying to sound the best we can, we’re not looking to do a professional performance at the highest level. We’re all about the community feel and the standard of a community choir can vary.”

“The YMCA Choir does not contain the best singers I’ve ever heard in my life, but it’s not about the quality voices of the individuals. It’s about the journey they make together and where they get to in the end. Everyone can learn something. Everyone can get better. No one has to join at a particular level – absolutely not. That would be boring.”

“When you get it wrong, it doesn’t really matter, because so many other people are getting it right. Some of the members are also in other choirs, so if you’re not as great as them, they can carry the day. It’s great to have lots of shoulders to rely on.”

Learning a variety of skills

This term, the YMCA Club Choir will learn songs from musicals, pop, traditional and classical genres. Kieran’s repertoire includes Sting’s ‘Fields of Gold’, Mozart’s ‘Ave Verum Corpus’, The Hunchback of Notre Dame’s ‘God Help the Outcasts’ and a selection of Christmas music in the run up to the festive season. The ten-week course will culminate in a Christmas performance.

Kieran will teach rhythm, harmony and how to breathe properly. They’ll improve their technique and pick up how to read music. Most importantly, they’ll learn how to sing as a group rather than a soloist:

“It’s quite easy for 20 people to stand together and yet, sing by themselves, but to actually be attuned to what’s happening around them, blending in with other sounds and learning the intricacies of ensemble singing - that is a huge skillset!

Besides learning and singing old and new songs, Kieran says singing can help you develop in other less obvious ways:

“Numeracy, communication, coordination and co-operating with other people in time. These skills are valuable, which people learn unawares during singing. Everyone achieves something.”

It’s not just about the singing

The process of coming together every week and collectively achieving something gives people a sense of enormous wellbeing. Kieran sees this all the time:

“For some, it’s the highlight of their week. It’s a real opportunity to meet people, network and catch up. It’s about connecting with people and friendships. It’s community comradery – everyone’s in it together.”

“In the end, there’s a performance where members get to show their family and friends what they’ve been doing. When you sing in a choir, everyone makes that musical journey together, which is special.”

But creating something so harmoniously beautiful doesn’t come without its challenges for both the chorister and the choirmaster. For Marion, it’s remembering the words:

“They want you to remember the words and I’m very bad at that. I’m on the sheet for a lot longer than most people, but if I stand at the back, it won’t matter!

For Kieran, it’s about striking a balance and believing it will all come together in the end:

“The most challenging aspect has to be about making sure that standards don’t slip. I’m trying to ensure that the music meets a certain level, but also trying not to push it too far or too little.”

“There are also times when I think that they’re not picking it up and it’s going to be a disaster and then everyone just pulls through somehow and comes together.”

If you’re nervous about joining the YMCA Club Choir, Kieran is on hand to give you the confidence and support you need:

“When they finally sing a 20 minute programme they never saw until ten weeks before – that’s a huge achievement, even for professional choirs. For them to feel that they have achieved something is really rewarding for me.”

“Just come along and try it. It can’t possibly hurt. It’s like everything in life - nobody’s looking at you and everyone’s thinking about their own voice and what they’re doing. You’ve got to get over yourself really. It’s such a great activity. You will not regret it!”

Please note that this term’s choir is fully booked, BUT the YMCA Club is taking bookings for the New Year. Interested? Please email declan.duncan@ymca.co.uk to reserve your place.

Ten sessions cost £60 culminating in a choir performance. You will learn to sing a variety of songs across a range of genres.