A fond farewell to “Bob the Vicar” 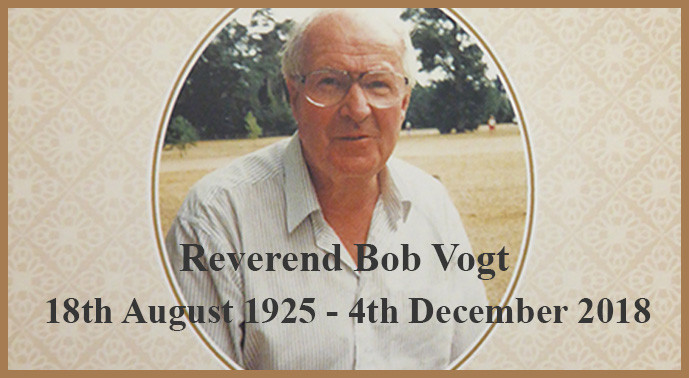 The Rev Bob Vogt, who had been a YMCA Club member for over 20 years, sadly passed away in December at the age of 93. Not long after joining the Club in 1997, he held a short Christian service in the chapel every Wednesday night without fail. We hear tributes from those who knew him best at the Club…

Phil Ashton, a retired Civil Servant and fellow life-time YMCA Club member from Cardiff, first got chatting to Bob one Wednesday night. Phil was into weights and martial arts back then and frequented the Club four or five times a week. Bob, a widower, loved to swim and chat. He shared his faith and put the world to rights with anyone and everyone. Phil recalls when they first met:

“I first met Bob in the YMCA Club Café in the late 1990s – he was wearing his traditional ‘dog collar’. Bob would be there every Wednesday evening, awaiting anyone interested in attending the Prayer Meeting. Being a lapsed Christian myself at the time, I rarely attended. Bob embraced me warmly, nonetheless, probably because of our common belief in Jesus, which I now realise, was the fertile ground on which we built our true and lasting friendship.”

A shared sense of humour

Back then, Phil needed a place to stay and Bob kindly offered Phil a room at his Blackheath home for six weeks, but ended up as his tenant for four years! They really cemented their friendship during this time:

“Bob was an honourable and committed Christian and a great lover of the Arts and theatre. He tirelessly raised funds for good causes including Deptford Reach Homeless Charity in Lewisham. Bob was a very ‘human’ being - a man aware of his own shortcomings, so always slow to judge others. He had a great sense of humour, which was similar to mine – we laughed at ourselves. Once when I visited him in hospital, I saw a funnelled cardboard box next to him, which to me, looked like an ear-trumpet for the hard of hearing. Knowing how deaf Bob had become, I jokingly held it to my ear to mimic deafness, but instead, got a stream of urine down my neck! The so called ‘ear-trumpet’ was actually Bob’s bed pan! And Bob’s response? He roared with laughter as did I.”

“Although I know he has gone to a far better resting place with Our Lord, I still miss him. Goodbye (for now) my good friend, and may Our Lord Jesus bless you and keep you always!”

YMCA Club’s Front of House Manager, Des Byrne, has worked at the Club for over 20 years and has gotten to know many members past and present. Des remembers Bob, of South African heritage, as a well-travelled ‘people person’:

“Bob quickly became a familiar face in the evenings. He would be found most nights in the café area giving his views on world events with the assurance of someone who had travelled to Nigeria and Tanzania during World War 2. He had served with the Royal Signals – the communications arm of the British army.”

A true man of God

Bob's bravery was matched by his brains - after the war he studied English Literature at Cambridge University. He became a Teacher and taught at Ardingly in West Sussex and later, Battersea in London. It was in London where Bob met and married his beloved Joyce who supported his call to ministry and passion for the poor until her death. Des also recalls Bob's commitment to God:

“Bob had spent most of his life as an Anglican Vicar in parishes around Coventry and South East London. He eventually settled in St Alfege's Church in Greenwich. He was fondly known by everyone as ‘Bob the Vicar’. Regardless of bad weather or ill health, Bob would hold the YMCA Club Prayer Meeting every Wednesday night. He will be fondly remembered and sadly missed by all the staff and members who knew him.”