What does it take to run a marathon? 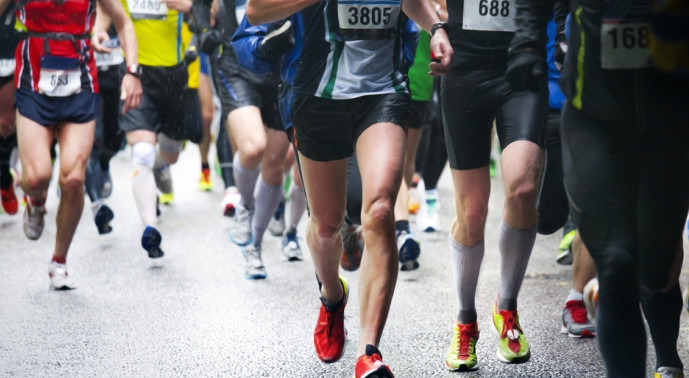 Are you tired of watching the London Marathon on TV and want to take on the challenge of running 26.2 miles?  Although an inspiring day, London can make running the marathon look easy but is it really the event for you? Our resident marathon running expert, and personal trainer, Victoria Brown explains the first steps you should take when training for a marathon.

Before contemplating the marathon you should ideally have been running for at least six months to a year and be able to run eight miles. If you’re not at this level yet maybe start with something more manageable such as a 10km or a half-marathon - see how you feel and then focus on the marathon at a later date.

The race itself may be long but to make it enjoyable or at least bearable do not underestimate the time you need to put aside to train for the event.  Most training schedules are for 16 weeks so be prepared to put four months of your life into running. You will need to run a minimum of three times a week but most runners will be embracing four to five sessions which will include a long run each weekend taking anywhere between 90 minutes and 3 hours.

London is not the only Marathon

The London Marathon undoubtedly has an amazing atmosphere but it is not the only marathon in the world – there are thousands taking place from famous city marathons such as New York, Paris and Berlin to more intimate countryside marathons. So if you don’t make the ballot and don’t want to enter through a charity, then start searching for other options. Most city marathons take place in spring or autumn with the summer period focusing on trail or off-road marathons, so deciding whether you like to train in the cold of winter or in the warmth of summer can determine which race you enter. Other considerations are the cost of the event and travel – do you make the marathon part of a holiday or do you find a local event when you can travel to and back in a day?  Spend time researching the event that suits you and read other runners’ reviews.

It’s not all about the running

Although the bulk of your training will be spent running; to prevent injury and to get the most out of your training you will also need to include other areas. Cross training such as cycling or swimming can help keep you cardio levels high without the impact on the joints that running produces. Strength and core work are essential, as is stretching, and without these the four months of intense training are likely to result in injury.

Running a marathon although never easy can be a most rewarding experience so whether 2015 sees you entering a race as a once in a lifetime event or if you are trying to improve your marathon time these posts will be there to support you and inspire you to make the most of the whole 26.2 miles.

About the Author
Victoria Brown has been offering her expertise as a qualified personal trainer on the YMCA Club floor since 2007. Victoria specialises in long-distance running, endurance and Exercise Referral. She caught the marathon bug in 2003 and since then has gone on to complete over 25 marathons all over Europe. In 2013 she completed 6 marathons in 7 months for a charity event and last year ran marathons in London, Zermatt and Luzern.