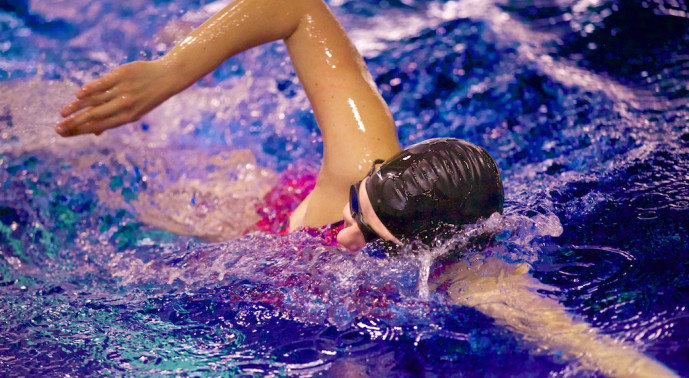 Triathlon is now widely seen as the number one sport that ‘fit people do’. At the YMCA Club we have state-of-the-art facilities for swimming, indoor cycling and treadmill running, so naturally many of our members are in the process of training for a triathlon, or have already done so.

The triathlon we see on TV is almost always the elite race, which has different rules and demands to the age-group racing that the great majority of us would compete in. The biggest difference between the average Joe and the elites is that they are allowed to draft each other on the bike, which means they have the added pressure of having to keep up on the swim or risk being left out of the lead group in the first transition. For those of us that compete in age group racing – drafting is not allowed on the bike. So when it comes to the swim, you can and you should swim your own race, especially if you’re tackling one of the longer distances! You need to pace yourself so it’s not a flat-out effort.

To increase your basic speed and fitness, it’s worth swimming sprints, but learning when to hold back is key to achieving your triathlon goals. Drafting is allowed on the swim, so it’s especially worth learning how to swim in someone else’s slipstream. When it comes to which stroke you should opt for, front crawl and breaststroke are both acceptable for triathlon swimming, but the great majority of triathletes swim front crawl. In comparison with breaststroke, it’s faster and it doesn’t use as much force from the legs. After all, triathletes have other things they need to use their legs for. Backstroke is not allowed, as lifeguards will take it as a call for help and no-one, I repeat no-one, swims butterfly... Out of the three triathlon disciplines, swimming is the one that many people struggle with the most, despite it taking the least time. Unless you are a natural born swimmer, and maybe competed professionally during your youth, you will need a lot of help with your technique – adapting your stroke for open water takes some practice.

The triathlon swim sessions that I coach at the YMCA Club every Tuesday evening therefore focus on front crawl. The first half hour, from 7.30 to 8pm, is all about technique. The main session, with three lanes, runs for an hour from 8 to 9pm and offers a free, coached, distance freestyle training session open to any fitness swimmers but with a focus on open water swimming. Some swimmers choose one session, some both, and some also swim with our Masters swimming club on Thursdays and Sundays (check pool timetable for details).

Open water swimmers don’t have to worry about dive starts or tumble turns. They also can’t rely on following lines at the bottom of the pool, so they have to check above the water to see the buoys that mark out the swim course. This is called sighting, and is an essential skill that can be practiced in the pool, keeping the head movement small and separating it from turning the head to breathe. You can also practice swimming in a straight line, treading water and starting in a group without pushing off the wall. Wetsuits aren’t required when training in our pool. They’re banned when water is warmer than 22 degrees C (for standard and sprint events) or 24.5 degrees C (for Ironman and other long distance events). Our pool is kept between 27.5 and 28 degrees, so all you need for triathlon swim training is your swimming costume and a pair of goggles.

So if you’ve been thinking about competing in a triathlon, the YMCA Club is the perfect place to practice and perfect your fitness, technique and strength for all three disciplines – especially the swim! See you poolside…