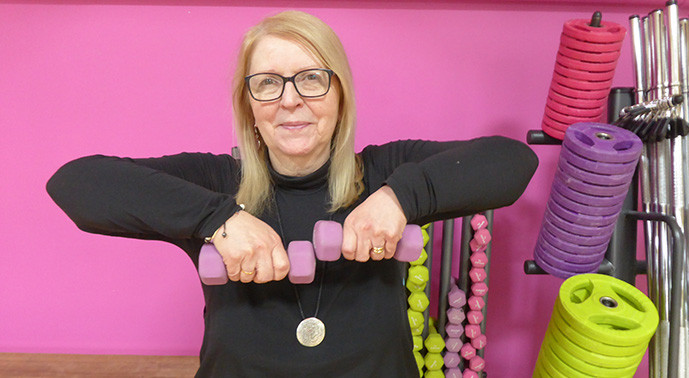 As we get older, musculoskeletal health becomes increasingly important. According to new joint research by Public Health England and the Centre for Ageing Better, poor musculoskeletal health can cause falls leading to 95% of hip fractures, which costs the NHS over £1 billion per year. In response, the YMCA Club runs monthly Older Adult Workshops in a bid to improve the health of the over 60s.

Poor musculoskeletal health is also the second most common cause of absence from work in the UK, resulting in approximately 30.8 million sick days every year. In older adults, it also increases the risk of a fall by 76%, but regular bone and muscle strengthening exercises can help to prevent falls, improve sleep and mood, increase energy levels and reduce the risk of an early death.

66-year-old Older Adult member, Brenda, is a grandma and retired Nurse from North London who has been coming to the YMCA Club since 2004. She knows only too well what it’s like to look death in the face. At 51, she had a heart attack, which forced her to re-assess her life and make some necessary changes. Stress, a family history of heart problems, poor diet and zero exercise, created a perfect storm for an unexpected heart attack.

“I made all the wrong choices”

“When you’re a nurse, you put other people first. I came last in the pecking order as I had other people to look after – that ups your stress levels. I worked in a pressurised environment and forgot about keeping healthy. The shifts were draining and I didn’t get proper breaks. I had high blood pressure and my brother had survived a heart attack when he was 52.

I’d never really thought seriously about exercise before. I ate all the wrong things and ate on the run. I had high blood pressure, but I wasn’t careful or aware of my weight. If I was feeling really hungry, I’d get a few donuts or pastries on the way home. That would be my pre-dinner snack or I’d have a quick McDonald’s hamburger. I would be starving as I hadn’t eaten all day. I made all the wrong choices - it was the pressure of work and feeling hungry.”

“I was shocked that I had a heart attack”

Leading up to the heart attack, Brenda was overweight and had been experiencing pain across her shoulder into her jaw. She put it down to the strain of her back-pack whilst walking to work, but by the end of the week, she was waking up to chest pains in the middle of the night. She took some aspirin and went back to bed. She went to A&E the next morning where a blood test confirmed that the pain was heart related, rather than muscular:

“I thought they had confused me with someone else, so I asked them to do the blood test again – it was difficult to comprehend. I was shocked that I had a heart attack. The pain was unnerving and disconcerting. I didn’t want to move – I just wanted to stay still. It was quite weird. I had pain in both my arms, which travelled across my shoulder into my neck, jaw and into my teeth. It’s a very tight crushing pain as opposed to a shooting pain. I became aware of my own mortality - It really shook my foundations.”

Brenda had an angiogram (when dye is inserted into the groin which travels up to the heart to identify which blood vessels are blocked). Brenda had a blockage and was diagnosed with acute coronary syndrome and had to have a stent (where a tiny tube is inserted into a blocked artery to keep it open to restore the flow of blood). To aid her recovery, Brenda was referred to the YMCA Club by the University College London Hospital’s Cardiac Rehabilitation Unit. Later, she joined the YMCA Club’s Older Adults Programme with her late husband.

The YMCA Club’s Older Adults Programme comprises of weekly classes covering a range of strength and conditioning exercises and monthly workshops which focus on particular areas such as ‘Resistance and Strength’, ‘Falls Prevention and Balance Coordination’ or ‘Posture and Mindful Breathing’. The monthly workshops attract around 40 people.

According to Public Health England, older adults should be undertaking suitable strengthening and balancing exercises at the right pace, twice a week, in order to maintain health, independence and support healthy ageing. Such activities stand older people in good stead through menopause, diagnosis of disease, retirement and recovery from hospitalisation.

Jess Kuehne from the Centre for Ageing Better claims that musculoskeletal exercise is just as important as cardiovascular exercise and benefits not only individuals, but our wider health services:

“We need to give equal weighting to activities that boost muscle and bone strength and improve balance rather than simply focusing on aerobic exercise. There is significant potential to make savings to health and social care services, if we do more to promote muscle strengthening and balance activities and recognise their role in helping to keep people healthy and independent for longer as they age.”

The YMCA’s Older Adult Programme has seen Brenda through some of her toughest times in life – rheumatoid arthritis when she was housebound for six months, bereavement and cancer:

“My husband joined the YMCA Club when I joined. We were both diagnosed with cancer within three weeks of one another. He had Stage 4 lung cancer. I had uterine cancer. We were having treatment together – it was really difficult. He only lived for six months after his diagnosis. He died 4 years ago, but I’m nowhere out of that quagmire of grief. It was difficult coming back to the Club where I’d been with him, but exercise and getting out really helps when you’re feeling low. This place has helped me to carry on. Having somewhere where you can come and you know people - they’re just so supportive.”

As a result of her heart attack, Brenda has made some changes and has become more focused on her health. Initially, she was put on cholesterol lowering tablets, took up exercise and ensured she took lunch breaks at work before finally retiring. Today, she’s more aware of what she eats.

As an Older Adult YMCA Club Member, Brenda has really benefited from and enjoys the Older Adult Workshops:

“The YMCA has given me confidence. Older people tend to feel a bit intimidated and they might not realise that doing something like this is really helping their bones and muscles and keeping them safe. Building inner strength is really good. They make you think out of the gym too, otherwise people won’t do much until their next class. Getting us to use our activities during the day is very good - you can still work your body when you’re doing the washing-up or getting in and out of a chair. It’s so important to keep moving. The more you can keep your bones strong, the more you can keep going.”

“People are at different stages, have different conditions and move at their own pace. Not everyone is running around in Lycra doing star jumps!  Nobody needs to feel stupid. It’s very friendly here - they treat you like an individual. They have a high level of knowledge and skill and are immensely supportive – they encourage me. I’ve tried classes elsewhere, but you feel intimidated if you can’t do it – I’m comfortable here. At the YMCA, if you can’t manage it, they modify it. So many people are willing to help and give you advice - it’s a great service. There isn’t anywhere quite like it. I always feel better afterwards.”

Participants will use specific exercises and movements to help them improve their posture, particularly around their shoulders and upper back. The session will also cover the benefits of correct breathing during physical activity.