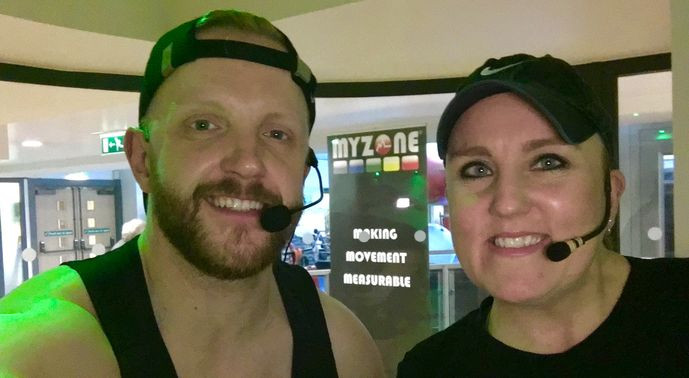 Something new happened in the Cycle Studio last month. For one week, lunchtime spin classes were twice as tough and twice as fun. Spin Battle was launched. Created by experienced YMCA Group Cycle Instructors and Personal Trainers Lisa Clough and Rich Allsop, here’s what happened.

Spin Battle is a spin class with a twist - two teachers taking turns to lead the group through some of their most popular and challenging music tracks. Two styles of music, one more hard dance and trance, one more handbag house and pop and they complimented each other perfectly to produce one of the hardest and most fun spin classes. Everyone who attended will remember it for all the right reasons.

“Between us we have around eight years of spin teaching experience and we love it,” said Rich.
“We’re good friends too so it was only a matter of time before we put our ‘spin heads’ together!”.

Lisa added: "There was nothing like it on the class timetable and we felt the time was right to mix things up. We came up with the idea together around three months ago and since then it’s been a case of refine, perfect and pick a launch date.”

Their regular lunchtime spin crowd seemed up for trying something new, but they would have to be strong to push through a class with two teachers keeping an eye on effort levels - so nowhere to hide.

The class was designed at a more intermediate / advanced level, however all levels can be catered for with the Cycle Studio's Matrix spin bikes - adjustable for your exact fitness levels. Lisa and Rich chose two lunchtime dates -  23rd and 25th May and then it was a matter of prepping the playlist.

"We took our time to select our most fun but challenging tracks and profiles, then we had to test to see how they all worked together as a complete playlist,” said Lisa.

“Exactly, would a hill climb to Little Mix sound right after a Sarah McLachlan track? Would Fleur East flow after Tiesto?” added Rich.

Along with running order, they had to decide how hard could they make the challenges (and the resistance levels). Anyone who knows Lisa and Rich know they’re friends with shared sense of humour. They wanted this chemistry to translate into both their teaching and class atmosphere but not overtake or dominate the session.

After all, it’s spin class workout not 'the Lisa and Rich show'. "Well maybe it is a little bit of that, but only in a fun and relevant way," reassures Lisa.

It’s often the case, even with a solo teaching class that you never know which tracks will work well until you practice the entire list in full on the bikes, why hich they did several times. "We wanted it to flow perfectly and we each rehearsed and memorised each others tracks - to make sure the class could continue in the event of an unforeseen technical hitch."

After two run throughs in the cycle studio, supremely supported with set up and sound checks by Group Exercise Manager Adrian Walters, the first session went well. The second session was “fantastic”. Lisa and Rich had really found their rhythm as team teachers, the chemistry and banter was good, the music flowed and there were smiles of fun and groans of hard pedalling and high resistance all the way through in equal measure.

There was a very satisfying reaction from all those that attended. Some said it was the most fun and challenging spin class they had ever been too. All in all our launch of Spin Battle was a great success.

“We really want to do it again and regularly,” said Rich.

Were you there? Please pass on your feedback to Adrian or Lisa and Rich in the club. Keep an eye on the club’s Facebook page. You haven’t seen the last of Spin Battle this summer! If you are interested in when the next Spin Battle class will be please email: richallsop@gmail.com or
evolve-fitness@mail.com.