“My lifestyle was damaging my organs” 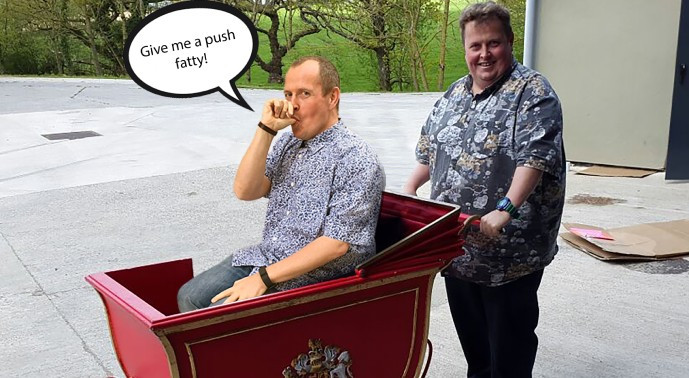 Chris Boone from Woolwich is fit and healthy and has not long celebrated his 40th birthday. As the old adage goes, ‘Life begins at 40’ - for Chris, it certainly did. Chris is an international Senior Production Manager on Les Misérables, one of the most successful musicals of all time, but before his ‘new life’ began, he was dangerously overweight. Chris’ boss, Cameron Mackintosh - the most powerful theatre Producer in the world - had noticed Chris’ weight had ballooned to 21 stone – it was time to take action…

“I’ve worked for Cameron Mackintosh for 14 years. I manage the technical side of his shows in the UK and internationally. In January 2016, I had just returned to the UK from Australia where I’d been working on Les Misérables. My Managing Director met with me to explain that he and Cameron were worried about my health. I had always been a big chap, but I had put on extra weight in the last seven years since giving up alcohol. They also noticed how very red I got whenever I was stressed. I hadn’t realised how dangerously overweight I was until they approached me.

The meeting was a real shock and I felt hurt - it took me three days to process. I was always working around the world, so a good routine with food seemed virtually impossible. I was living on pasta, pizza, chocolate, crisps and lots of fast food. I got out of breath easily and had a lazy attitude towards walking. They asked me if I was committed to sorting myself out - I wondered if I could do it and whether I would miss out on great food. I liked to be in control and avoided leaving my comfort zone wherever possible. I kept going over everything in my head, but eventually, I agreed to see a Nutritionist.

I saw Sue Camp, a Nutritional Therapist at Weight Matters in London. My head was telling me that I didn’t need help, but my heart was telling me I did. After climbing four flights of stairs (cruel for an overweight person!) I arrived as a very red-faced, overweight man. It was here that I began my journey. Sue explained what my very sweet diet was doing to me and that I was always hungry because my blood sugar was all over the place. I was eating the wrong things at the wrong time, ie, very late at night. It was hard to hear that 90% of what I had been doing was wrong, but with little steps, change seemed possible. My goal was not to be overweight at the age of 40, even though I was fast approaching 37.

Everything was in red for my first blood test report! I realised that losing weight wasn’t just about looks - my lifestyle was actually damaging my organs, especially my heart and liver. I had to give up sugar, but my mug was never empty as I drank up to 12 cups of coffee per day. I loved biscuits with my hot drinks, so I decided to give up caffeine altogether. My headaches from giving up sugar and caffeine were awful - they lasted for 21 days. Although I felt grumpy and unwell, I didn’t give in.

Eating healthily around the world

I started walking 20 minutes every day during my lunch break and began swimming three nights a week. I walked up escalators and got off the tube earlier to help me achieve 10,000 steps per day. They were small but important changes. The most difficult challenge was eating while travelling for work, but I realised this was just an excuse and that I needed to re-train my mind. When I worked abroad, I still had to eat healthily. I was about to go to Manila for eight weeks for a new production of Les Misérables, so I had to nail the problem. With the help of the hotel Chef, we created a food plan full of raw ingredients, fruit, chicken and fish. My suitcase was also full of porridge.

After my eight-week trip, I weighed myself at home and found that I had lost just under two stone - I felt incredible! I couldn’t believe I opened a new show in Manila and was still able to keep to my regime. Now I was eating the right food at the right time and enjoying new flavours which I hadn’t tried before such as sea food and amazing salads.

The weight kept falling off and by the end of year one, I had lost nine stone (53.4kg). My blood tests had vastly improved and my metabolic age came down from 62 to 38! I was swimming 120 lengths a week, walking everywhere and decided to treat myself to a Brompton bike. I was on a high, ready for Christmas, but I knew it would be hard because of my tendency to over-indulgence during this time of year, but with good planning and support from my family and friends, it was ok.

My flatmate, Jess, had been going to the YMCA Club for four years. She kept telling me that it was a great gym, that everyone was really friendly and that I should join. I was terrified because I thought I would be judged. I had tried a few gyms before, but hated them. I decided to arrange a walk around the YMCA Club and it was an eye opener. I was surprised at how friendly it was and it felt more like a sports centre than a gym. I joined in early 2017 and began walking on the treadmill. After a few weeks and a lot of encouragement, I started doing Circuit Training and Cycling. I got myself a Personal Trainer (Magda) and really got into it. I want to thank everyone at the YMCA as they made me feel so at home.

I had new goals - by the end of summer 2017, I wanted to run 5K, walk up Mount Snowdon, fit into a Fred Perry t-shirt and buy clothes from a range of high street stores, rather than just ‘High and Mighty’ – a store for larger men. I smashed all my goals. Then I was off to Brazil for eight weeks, but it wasn’t a problem. I just made sure I ate good food before 7.30pm. The fruit in Brazil also helped – they had amazing pineapples to die for!

Now I go to the YMCA Club about three or four times per week. I leave most classes looking as red as a post box and wobbling, but I have so much fun. I’ve attended most classes now - apart from Zumba, which I tried in Mexico, but didn’t enjoy! Now I run 10k once a week and swim 2 miles every week.

As I’m always travelling, I spend 90% of my time eating out which can be easy or hard, depending on where I am, but I can always find healthy food if I look hard enough.

It’s very important for me to socialise with friends over dinner. I don’t count calories or eat any diet or low fat products. I eat lots of vegetables, salads, fruit, fish, chicken and I eat red meat once a week. I don’t eat any sugar or processed foods. Everything I eat now is fresh. I do eat low carbs such as a little bit of rice, chick peas and quinoa. I avoid white carbs like pasta, bread and potatoes. Being from Stoke on Trent in the North where every meal is served with double spuds and bread, this wasn’t easy! I drink a lot of fruit tea and four litres of water every day. I also add fruit and / or mint, ginger, lemon to the water to make it into a cocktail. My food schedule:

A lifestyle not a diet

My one piece of advice, which I do every day, is to plan – I never leave the house without knowing where I’m going to eat my three meals that day. That way, I don’t end up eating rubbish. We’re surrounded by unhealthy food, so decision-making is very important. I always carry a healthy snack, like an apple, just in case I get hungry.

My new lifestyle has changed me in so many ways. I can’t begin to tell you how much better I feel. I didn’t realise how many problems are linked to a bad diet and lifestyle. I didn’t sleep well before and my energy levels were so temperamental, I would get grumpy when I was hungry! Now I sleep well and I’m told I have too much energy! I’m not as grumpy as before (I hope!)  Most importantly, I don’t feel like I’m on a diet -  I’ve changed my whole lifestyle and that’s why I’ve been able to maintain my weight of 12.2 stone (78 kg) for the last couple of years. I can’t recommend living this way enough!”