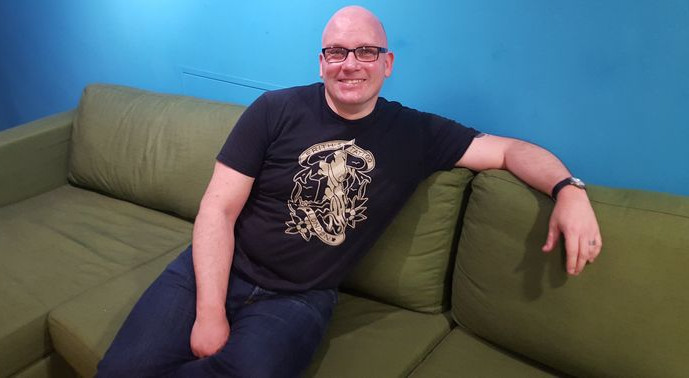 What, if any, exercise/fitness did you do before you joined YMCA Club?

In the 1990s I played rugby. In the 2000s it was judo. But I had to give both of them up due to injuries. As I got older I started going to the gym and running sometimes, but pretending I was working harder than I really was.

What motivated you to join YMCA Club?

In 2011-2012 I went back to university to study. I spent every day in the library. I lived on a diet of university food and Haribo, and realised afterwards that I had put on a ton of weight and felt fat and middle aged. So I joined the gym to do something about it.

I'd been a member at the Y when I worked in Tottenham Court Road in the 1990s, and remembered that every day of the week there were lots of classes, and that's what I needed to change the way I was living.

What’s your favourite class/activity at the gym?

I mix classes: every week I do three or four. Spinning, circuit training, sculpt (weights), VipR, and sometimes something new. I do some running and other cardio as well, but I prefer group exercise.

What is your regular weekly fitness routine?

I like to come to the club three or four times a week. My job is busy but involves sitting at a desk, so I try to work as hard as possible while I'm there, because I might not be able to come again for four or five days if I suddenly get busy. If I train hard when I can, it's like putting more money in the bank.

How has being a member at YMCA Club helped with your fitness targets/goals?

Meeting a group of people, both the staff and my friends in the gym, helps me to put in maximum effort while I'm there. On winter nights, when I'm about to turn left to the tube, the club gives me the motivation to turn right and go to a class instead.

What current/future fitness targets/goals do you have?

A few months ago I was sorting through some old papers and found a log of my training times 20 years ago, when I was training for a half marathon. So by the end of this year I want to be running the same time times again.

How does improved fitness help you in everyday life?

I have more energy and better concentration. It stops me putting on weight, which is easy for me to do, because I really enjoy food.

Do you think exercise has an impact on you mentally e.g. confidence, alertness, stress, depression?

I'm happier when I exercise. I'd like to think I get more done every day, even allowing for time in the gym. Sometimes I have to work for 24 hours at a stretch. You can't do that unless you're physically fit.

Do you have any friendships from the Club?

By now I know a lot of the other regulars and the trainers. It's good to meet people from outside your work, because they're from all sorts of countries and backgrounds. When you have a hard day it's good to get out and talk to different people. I admire a lot of the people I have met at the Y because they work hard, put a lot in, and earn the result they get.

What keeps you motivated to workout at the Club?

By now it's a part of my routine, but a good part. I don't think of the Y as a chore or a responsibility.

What’s your favourite thing about the Club?

The instructors. They're experts in what they do, and they give you good advice and encouragement. A few of them let me know if I'm slacking off too (I'm looking at you Terri).

How would you describe YMCA Club to a friend?

You feel welcome, like you're meant to be there.

What in your opinion differentiate YMCA Club from other gyms?

Outside the Y: Five times completed the Tough Guy competition. Inside the Y: Last year's Tour de Y (100km – effectively it's five back-to-back spinning classes). And I lost 15Kg of weight through exercise.

The best days are when you do something new or find out something you didn't know.