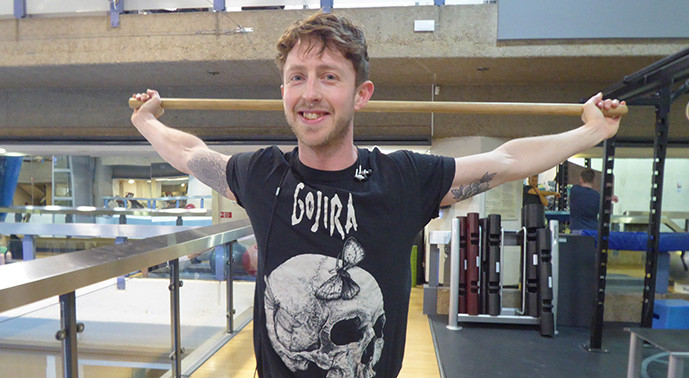 David, a 33-year-old award winning Animator from Enfield, has been a YMCA Club member for nine years. He also currently holds the enviable Club title of ‘Fastest Bleeper’ having achieved a result of 14.2 in the bleep test in June 2017. So how does he do it? David shares the secret of his success…

The YMCA Club runs bleep tests every month to measure fitness levels. Results in the Club range from 5 to 14. Anyone who scores between 14 and 25 tend to be professional athletes or players, so David is considered “very fit.”  He’s a regular in the gym, cycles to work, plays football and competes in the YMCA Triathlon every year. David has taken the bleep test once a year for the past six years. He explains how it all started:

“I’d seen them before, but had never done one myself. I’d been doing Shun-Yin’s Circuit Training and she had set up the bleep test and asked if I’d be interested in doing it. When I first did it, my score was 12. I’d been doing some long distance running which I thought would benefit me, but I was more tired than I expected. Now my score is 14.2 which takes me about 15 minutes. As I get older, my age isn’t affecting my score, which is good. It’s encouraging, so I keep going.”

Although the bleep test is facilitated in groups of up to 15, some people are totally focussed on beating their own result as opposed to competing with anyone else. David however, finds the group dynamic useful:

“I like to compete with others who are at the same level so we can work off each other. As soon as you’re doing it by yourself, it becomes much harder. For me, doing exercise with other people is always encouraging - hearing other people cheering me on or telling me to pick up my knees has really helped me. It’s also quite social – a lot of people who do the test are regulars from YMCA Circuit Training, so we have something to share and talk about. It’s fun.”

Top tips to beat the bleep

Bleep tests indicate whether you’re progressing in your fitness journey. If you are progressing, it’s a real morale booster. Regardless of how short the test is, it’s also a high intensity cardio work out in its own right. As the test continues, you will feel more tired, but ironically you will have to run faster in order to beat the bleep. Participants are literally sprinting in the end. David shares his tried and tested tips:

“Stay calm and don’t go too crazy at the start. Pace yourself! Think about your approach and technique, especially your turns. When you get to the other side of the hall, don’t stop and turn around – that’s really halting. Instead, you can go a lot further if you’re prepared for your turns before you get to them. Also, I wouldn’t advise running if it’s painful. Push yourself and leave your comfort zone. You’ll surprise yourself at how far you can go!”