5 reasons you should be doing HIIT 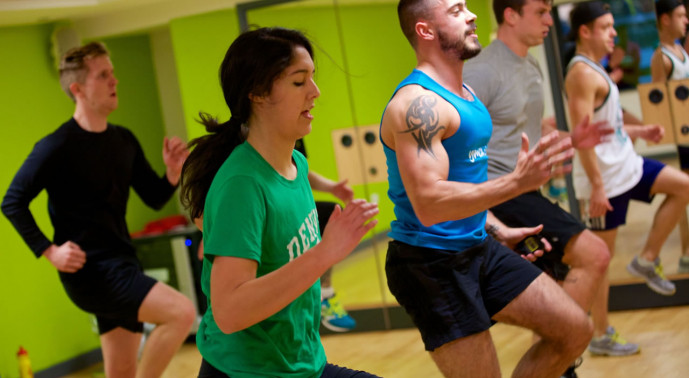 If you’re still slugging away on the treadmill, cross trainer or bike – trying to burn fat for hours on end – you may be surprised to learn there's a scientifically proven and more time-effective way of getting results. High Intensity Interval Training (HIIT) has been shown to burn fat more efficiently than regular cardio – something the experts like to call Excess Post-Exercise Oxygen Consumption (EPOC, also known as the after burn effect). This basically means you have an increased rate of oxygen intake following strenuous activity – intended to erase the body's ‘oxygen deficit’.  EPOC can last for up to 24 hours after your workout, meaning you will still be burning calories and fat after you leave the gym, which isn’t the case with exercise of a lower intensity.

HIIT workouts tend to last anywhere between - to 20 minutes (if you have the energy to last longer then you’re not working hard enough!), and consist of short bursts of maximum intensity effort with rest periods in between. A good example of HIIT is Tabata – a 4-minute workout consisting of eight rounds of 20-second high intensity work with 10 seconds of rest in between. As well as burning fat, HIIT has been proven to be just as effective at building overall cardio fitness as well.

Sound good? Here are five other reasons why you should be doing it:

As a Personal Trainer, I come across clients all the time who have busy lifestyles and demanding jobs, meaning they don’t have the opportunity to spend as long in the gym as they would like to. If like my clients you love to workout but can’t spare more than your lunch break, a 30 minute HIIT session is just as effective (if not sometimes more!) as an hour workout.

Being rooted to the same machine, staring into space, can be a bit mind numbing for some and the body adapts very quickly, making your workouts less effective. HIIT will keep your body guessing – plus it doesn't just have to be done on a machine! You can make your cardio workout even more varied by including some resistance and plyometric exercises. Try some sprints mixed in with your squats; or some push ups, deadlifts, box jumps, burpees or medball throws.

Ever noticed sprinters tend to be more muscular then long distance runners? If your goal is not only to burn fat but also to build muscle and tone up, rest assured that HIIT will not deplete your hard earned gains. HIIT also gives a boost to your metabolic rate as your body needs extra recovery time and it increases production in Human Growth Hormone (HGH), which in turn also slows down the anti-aging process.

This is not a workout during where you can watch a film on your iPad, read a magazine or catch up with the latest gossip (believe me, you won't have the breath to talk). With the short duration and the need to be working at maximum intensity, you will be giving your all throughout. For me, there's no better feeling then finishing a workout knowing you've given everything you got!

If you’re looking to add HIIT into your routine, the YMCA Club timetable offers several highly energetic and motivational HIIT classes, coached by myself and Angela. I also offer a HIIT based personal training package (HIIT 6) which is a sure-fire way to kick-start your summer fat loss. Don’t be put off by HIIT if you are a beginner, the intensity is based on you own perceived exertion. You’ll be working out at your own maximum limit, and trust me, you’ll see your fitness levels improve in no time.

Danny Brown is a REPs level 3 personal trainer at the club specialising in HIIT, met-con and strength and conditioning. He has taught a variety of classes and has also promoted at his own HIIT Personal training program. In his spare time when his not putting his clients through his paces he can be seen at his local Crossfit box or smashing ropes and flipping tyres on the gym floor.