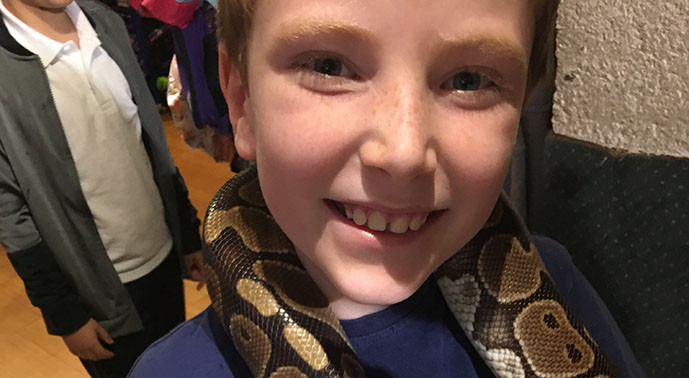 As Easter approaches, the YMCA Club Holiday Playscheme is gearing up for two weeks of organised fun and welcomes children from all walks of life. It’s run by a dedicated team of trained staff and volunteers who coordinate physical and educational activities for 60 four to 12-year olds. 10-year-old Edward from Camden is one of them and has been attending for six years.

Edward has a very rare metabolic disorder which only a few people in the whole world have - one of the other people is his severely disabled 16-year-old brother who needs 24-hour care. Edward’s milder condition means he has a much younger mental age and learning disabilities which impact his concentration, interaction and fine motor skills. He can’t read or write yet, but he is learning to recognise letters. Dani, who is Edward’s live-in carer, discovered the YMCA Club Holiday Playscheme and always accompanies him to the Club:

“At first, I didn’t know if the YMCA Playscheme was going to work because it isn’t particularly ‘special needs’, but because they let me stay on during the sessions, it meant that Edward can get involved in all the activities and dip in and out whenever he feels like it. After I found that it worked so well, I haven’t really looked for anything else.”

A stimulating and positive environment

Our playscheme prides itself on its diversity – our children have mixed abilities, ethnicity and come from local state schools, private schools or are dropped off by parents who work in the area. Some children, like Edward, have special needs including dyslexia, autism, ADHD or physical disabilities. Whatever their background, they are welcome, as every child understands the language of play. Edward’s mum, Sarah – a married working mum of three - believes that mixing with mainstream children has helped Edward’s development:

“Edward interacts with mainstream kids and he couldn’t do that unless he was in a supportive, positive and flexible environment. It’s helping him grow and become more ambitious and I’m not sure where else we would go for that. It’s helping him to bridge that supportive special school environment and integrate him into mainstream life, which is what he’ll have to deal with as an adult. It’s a very valuable stepping stone.”

Most gyms around London are set up for adults, but here at the YMCA Club, we recognise the importance of introducing exercise from an early age. Studies show that as a child progresses into adulthood, they are more likely to continue with an active lifestyle. Between the ages of four and eight, a child is developing their body, multi-skills and coordination. Our programme focuses on this using sport and other activities for their development, in a fun and inclusive environment. Sarah says inclusivity at the Club is key for Edward:

“The people at the YMCA are understanding, tolerant, patient and flexible - it's at every level. They treat Edward like any other child, but with more awareness of his limitations. Even the people on reception know Edward now, so when he goes up and he asks the same question every day, they are totally fine with it. They answer him and always have a smile for him. People are really supportive of him and are really there for him - it’s lovely.”

On any given day, the playscheme is overseen by one manager and six trained and experienced staff, plus volunteers who all have enhanced DBS clearance. All staff have regular training throughout the year.

We provide a wide range of activities

Our playscheme is deliberately a ‘screen free’ zone given that many children already spend a lot of time playing games and using iPhones. We want to inspire fitter, healthier and more active lifestyles. Edward, like other children, loves the range of activities on offer at the Club during the school holidays.

“He always looks forward to the play scheme - he just loves it, especially cooking with Marian. He’s also made some lovely friends who keep him active, which is so important. The 6 week summer holidays is a long time for a child like Edward, so to have some structure is just brilliant. It makes him happy.”

Costs and how to book

We are now open for bookings!

The Easter playscheme will run from Mon 8th to Thurs 18th April from 9.30am to 4pm (main programme).

Membership for each child costs £30

Earlybirds from 8.30am costs an additional £2.50 per child per day

Twilights after 4pm costs an additional £3.50 per child per day

Please pay on Reception in advance and fill out a registration form – book early to avoid disappointment.

Places are limited and are filled on a first come, first served basis.