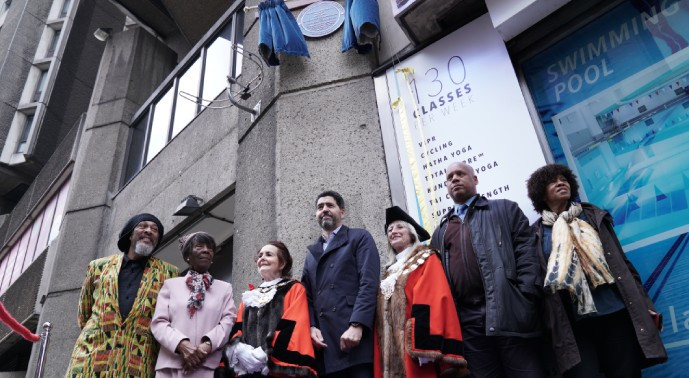 A piece of important social history came to light last month. A large group of people gathered outside the YMCA Club entrance to honour Dr Harold Moody who established the ‘League of Coloured Peoples’ 88 years ago. The blue commemorative plaque will be a permanent reminder that Britain’s first civil rights organisation was born at the YMCA Club in a bid to fight racial inequality and injustice.

The event, which was organised by the Nubian Jak Community Trust, was attended by a host of prestigious guests including David Ball - the great nephew of Dr Harold Moody. He was joined by Tony Warner - the Founding Director of Black History Walks, Mark Wadsworth – the Founder of Anti-Racist Alliance, Universal Poet - Raoul Dero, Tracey Blackwood - Minister Counsellor for the Jamaican High Commission and Central YMCA CEO – Rosi Prescott.

The Mayor of Camden and the Deputy Lord Mayor of Westminster both had the honour of unveiling the 43rd Nubian Jak blue commemorative plaque in all their regalia, as Bob Marley played in the background. Previous Nubian Jak plaques honouring black historical figures include Bob Marley (their first plaque), Mary Prince - British abolitionist, jazz musician - Sidney Bechet, George Padmore – a leading pan-African journalist and Learie Constantine – the international cricketer, lawyer and politician.

Ahead of his time

Dr Moody, a qualified physician from Kings College, was at the forefront of social change in Britain long before any legal changes were made to tackle racism and discrimination. He fought for the cause decades before Martin Luther King came onto the scene. Speaker, Tony Warner - who sponsored the event and arranges Black History Walks, which refer to Dr Moody’s involvement with the YMCA Club - revealed his own personal connection with the YMCA:

“I used to live here back in the 80s when I was a young man. Shout out to YMCA when I was struggling because it was a cheap place to stay. I was impressed that this black Jamaican guy was living here in the 30s and had his own civil rights group right here in England. Martin Luther King came to prominence in America in 1955, fighting for equality in education, housing and employment, but Harold Moody did the same thing right here in history in 1931 long before Luther King did his thing in America.”

Tony went on to explain that Dr Moody formed the League of Coloured Peoples with the help of other young, black men who were living and studying in London at the time, who later became famous in their own right. This group included Jomo Kenyatta - the first President of Kenya, Paul Robeson – the Singer, Actor and star Athlete who studied at London’s School of Oriental and African Studies and world famous Cricketer, Learie Constantine. Together they actively fought for equality.

Today, most of Dr Harold Moody’s relatives live in Auckland, New Zealand, but at the eleventh hour Nubian Jak Founder, Jak Beula, managed to track down David Ball whose great uncle was Dr Harold Moody. David Ball is the Founder of BrandFuel, a creative agency that specialises in events, digital and design. David, who is also an international athlete in his own right, was clearly moved by the experience:

“I’m honoured to be the only Moody representative here today. My mum, Pamela, was daughter of Ludlow Moody, Harold’s brother. Harold was so ahead of his time and to form this league before anybody else, is just amazing. I’ve been to his house in Peckham and read about how he looked after coloured people when they had no representation whatsoever. It’s very important in our diverse society (particularly London) for people to understand what happened in the past – recognising those people who were trying to make a change. I’m incredibly proud and humbled by what Harold achieved 88 years ago – phenomenal!”

Other speakers referred to Dr Harold Moody’s strong Christian faith as a significant factor which prompted him to take action on behalf of others who, like himself, experienced extreme racism and persecution. This serves as a reminder that the Young Men’s Christian Association (YMCA) was also founded by fellow Christian, George Williams, who battled against the injustices and inequalities of his day – namely, the deplorable living conditions that young men working in London found themselves in.

“Dr Moody was a caring, devout Christian whose beliefs led him to help the oppressed in society in which he was apart. He heard the cries of the disadvantaged and as an educated man, he gave of himself in the struggle against oppression and injustice. Although he faced discrimination himself, he was resilient and graduated as a doctor at the top of his class with many awards. He was not allowed to work in hospital himself, but through determination, he went on to establish his own medical practice where he became very successful and took the time to care in the face of racial injustice.” 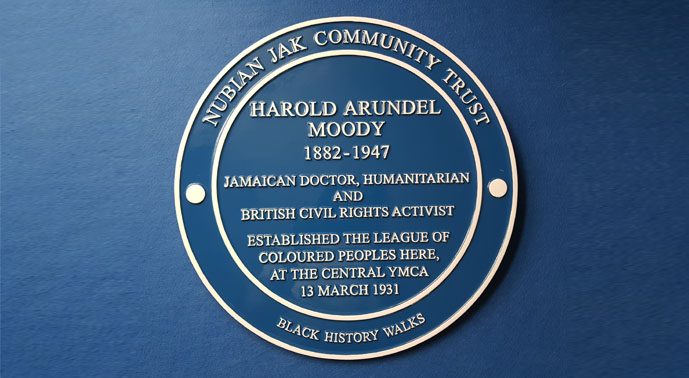 “A Tribute to Doctor Harold Moody

Dr Harold Moody I present to you.

The eldest child of a retail chemist,

who came to London in 1904 and encountered a great deal of prejudice.

heightening his understanding of the pervading Colour Bar implications.

In 1913 he started his own medical practice in South London, Peckham,

a prudent decision given his stark situation.

a response to the amount of escalating cases, hardship and inhumane plight from discrimination and ill intent.

On 13th March 1931 where his journey began at the Central YMCA in Great Russell Street, London,

as the President of the League of Coloured Peoples with an executive team at hand incorporating members of the Gold Coast and Caribbean.

It had clear aims in support of their fight for universal race equality and human rights, improving relations between the races to promote and protect the social, educational, economic and political interests on a worldwide basis.

Cooperating and affiliating with organisations sympathetic to the key objectives and the desire to protect it,

The league also sought to address the persecution of Jews in Germany before WW2, publishing its own journal, expressing its fundamental point of view called ‘The Keys’ – a powerful medium to discuss what was at stake such as the Colour Bar in Britain, injustice in the work place, treatment of black nurses and what they had to face, the evacuation of African, Caribbean and Asian children during WW2.

Discrimination, desegregating sexes of the British Armed Forces was commonplace in full view.

Dr Moody, A devout Christian and philanthropist, worked for the Civil Defence too, campaigning against racial prejudice what the armed forces continued to do.

By 1943, the league had reached its peak as a pressure group,

although successful in its methods despite disapproval from wider radical groups.

Sadly the League of Coloured Peoples folded four years after his death on 24th April 1947, taking the civil rights movement nowadays to a different level.

Today, 13th March 2019, we gather to acknowledge his legacy 88 years on as Britain’s first civil rights movement of the 20th century.