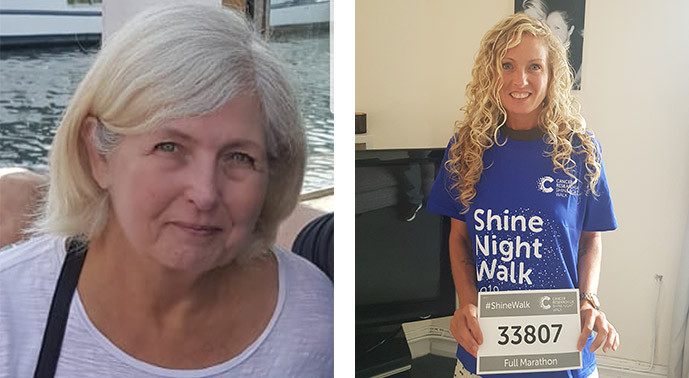 You might know YMCA Club Fitness Instructor, Niki Rossall, from ‘Body Sculpt’ or ‘Legs, Bums and Tums’, but on Saturday 21st September, she’ll be using her legs to raise money for Cancer Research in memory of her dear mum, Marion, who sadly passed away in July.

What happened to your mum?

In January this year, my mum’s face swelled up and we thought it was an abscess, so we took her to the dentist. They gave her antibiotics, but that didn’t work. It kept getting bigger, so we took her to the doctor who said it was cancer. They found it in her face, arm, back and liver. It grew for a year without us even knowing. My mum didn’t have chemo because it was too far gone.

In the end, the cancer spread to her brain - it got her in six months.

She would have been 66 in August.

Very sorry to hear that. Pleas tell us more about your event

It’s going to be really good. It’s basically a 42 km walk (marathon) from Southwark Park to Billingsgate. We’re setting off at 8pm. You walk all the way through the night passing loads of London landmarks such as the Tower of London, St Paul’s Cathedral and Buckingham Palace. It’s something a bit different. You can also do a half marathon, but we chose to do the full marathon – no pain, no gain!

Who are you doing it with?

There’s about eight or nine of us from my family – everybody who was close to my mum. We’re trying to raise £500 each. To be honest, I don’t think many of them are in training, so they’re going to suffer, but at the end of the day it’s for a good cause and it’s for my mum.

How long will it take?

I’m hoping to do it under six hours if I can, maybe seven.

Are you dressing up?

We’re wearing tee-shirts with my mum’s name and photo. As it’s at night, people tend to dress up in fluorescent necklaces or put glitter on their faces - we’re obviously going to do that too.

Can anyone join in?

Anyone can do this walk – you just have to register online. We all paid £35 each and Cancer Research send you supportive emails about how you can raise money and training tips, etc.

How would you like everyone to remember your mum?

I want her to be remembered as a really strong minded, loving woman. When we found out how bad it was, she didn’t cry once.

The only time she cried was when my sister bought her a ticket to see the operative pop group, Il Divo, at the Royal Albert Hall on 3rd July. She cried because her six month prognosis meant she might not see the show. She was so poorly and in a wheelchair, but my mum did make it and saw the show. We all sat together, which was so nice, but four days later, she was gone.

My mum was a very special lady. She was so determined to see Il Divo and when she set her mind to something, it didn’t matter what was in her way, she just did it.

The ‘Cancer Research Shine Night Marathon Walk’ is a great way of raising money and doing something together. I’m trying to get as many sponsors as possible.