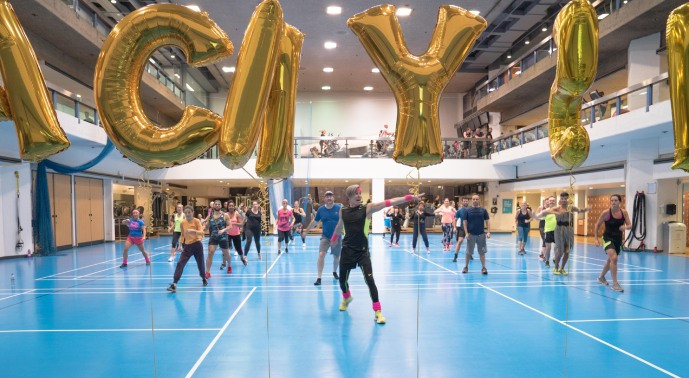 If you couldn’t make our big 175th birthday bash, here’s a round-up of what you missed!

Exercise Through the Ages

For the first time ever, the YMCA Club showcased its extensive range of fitness classes ‘through the ages’ from the groovy 70s - when the Club began - to the present day, with music and fitness fashion to match.

Around 70 people were booked in for our ‘Exercise Through the Age’s across the two hours, sporting a variety of fluorescent and vintage gym gear. Our very own gym team were decked out in animal prints, tutus and day-glo.

They led the party-goers through an exercise extravaganza of Aero-dance, Legs Bums and Tums, HIIT Combat, Total Ballet Barre and Primal Patterns, which naturally culminated in the Village People’s ‘YMCA’ finale!

The YMCA Club’s over 60s group had a blast at the ‘Disco Zumba Gold Masterclass’ - they wore even more outrageous costumes. Around fifty members turned up led by the YMCA’s Communities Programme Manager, Declan Duncan, who wore a lime green, flared, 70s shell suit – a sight to behold! They exercised to the sounds of Gloria Gaynor, Heatwave and Barry Manilow, before indulging in the after-party.

We’d like to say a big thank you to our neighbour ‘VQ 24 Hour Café & Diner’ who kindly donated beer and wine to our Older Adults’ after party. Members can take advantage of the 20% discount off VQ Bloomsbury food and drink in future, simply by flashing their YMCA Club membership card.

Congratulations to Colin Davidson who won the prize for the best dressed participant (spot the wig, moustache and red trousers!) in the 175 Disco Zumba Gold Masterclass.