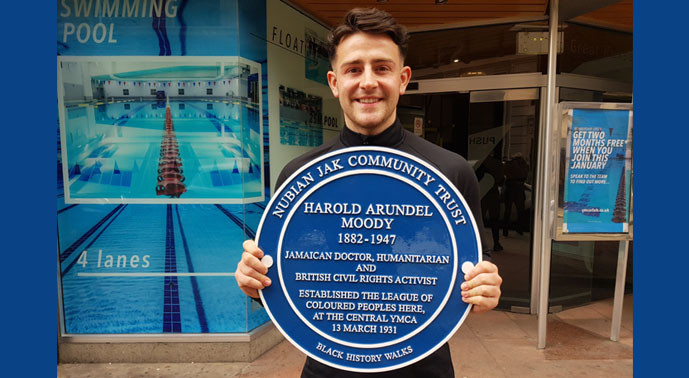 A blue commemorative plaque will be unveiled outside the YMCA Club on Wednesday 13th March at 1pm to honour Dr Harold Moody, the founder of Britain’s First Civil Rights Movement. Club members are welcome to attend the ceremony, which will be followed by refreshments on the Club balcony.

Dr Moody, a Jamaican-born physician, formed 'The League of Coloured Peoples' with 70 other YMCA Club members on 13th March 1931. The organisation, which primarily sought to establish racial equality around the world, also aimed to address the persecution of the Jews ahead of World War 2.

The YMCA has always prided itself on being an inclusive organisation and we are delighted to celebrate this important 88th anniversary. The ceremony will be addressed by the following key speakers:

Writer and broadcaster, Marc Wadsworth - Founder of the Anti-Racist Alliance which started the Stephen Lawrence campaign

A Poem will be read by Universal Poet, Raoul Dero

Rejected because of the colour of his skin

Dr Moody came to London in 1904 to study medicine at King's College. He was completely unprepared for the racism of Edwardian London. He found it difficult to find lodgings. Despite winning many prizes and qualifying as a doctor in 1910, he was denied a hospital job because the matron refused to “have a coloured doctor working at the hospital.” Although he was the best qualified candidate, he was also rejected for the post of Medical Officer for the Camberwell Board of Guardians.

"Before the colour bar (racial segregation) was disbanded in the UK, before the British Race Relations Act was instituted and amended, before the Commission for Racially Equality was formed, there was an organisation in Britain founded by Dr Harold Moody which fought for the civil rights of people of colour. That organisation was the League of Coloured People founded by Dr Harold Moody at Central YMCA in 1931.”

The main aims of the League of Coloured People were:

Two years after its formation, the League of Coloured Peoples, began to publish its own journal called 'The Keys'. It became a powerful medium which discussed racial segregation, work place prejudice, the ill-treatment of black nurses and discrimination against black children during the evacuation of World War 2.

The League folded after the death of Dr Moody in 1947, but not before taking its place as Britain’s first civil rights movement of the 20th century. Tony Warner, Founding Director of Black History Walks, feels it’s about time that Dr Harold Moody was recognised for his work:

"Dr Harold Moody was doing the same thing that Dr Martin Luther King was doing - but 30 years earlier and in London, as opposed to America - so why is he not better known here? Our Black History walks, bus tours and river cruises address that imbalance."