Could You Brave the “Arctic Enema”?! 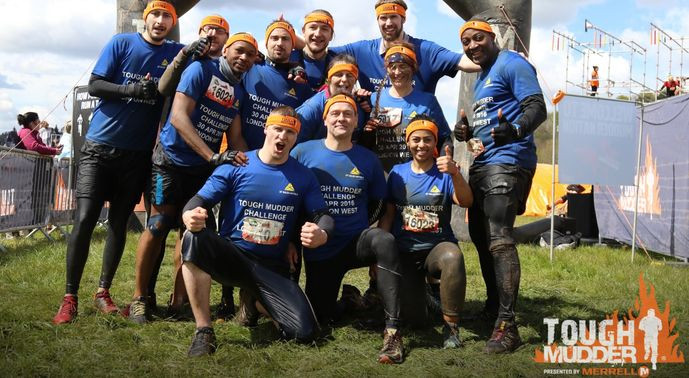 Staggering through ice water. Braving electric shocks. Tackling barbed wire. Crawling through mud and scaling towering walls. Yes, this sounds like scenes from a terrifying war movie, but in fact it’s all part of Tough Mudder, an annual outdoor event held on Oxfordshire’s Culden Faw in which teams of intrepid warriors (or in our case, hospitality staff) battle their way through an assault course for charity.

“A huge sign greeted the participants at the start of the course,” she told us. “It said ‘Welcome to Hell’ – and so our challenge began.”

Some of the obstacles the team had to face on the ten-mile course included the bizarrely named “Arctic Enema”, submersion under 10 tonnes vat of ice, “Mud Mile” and “Electroshock Therapy” which – yes – did actually involve being electrocuted. Good job, then, that the team were given the best preparation possible: a training schedule led by YMCA Club PT Steve Whitmore.

“Steve did a wonderful job of putting together a fitness programme to help us face the challenge both mentally and physically,” said Azidah. ”He helped to motivate our team through the tough times. He listened to our moans and pains and provided us with good advice. He encouraged the team spirit and as a result we had a good strong team to face the Challenge. Steve is without a doubt, an inspiring, caring and committed coach.”

If you’re interested in what it takes to become primed for the Tough Mudder challenge, these are the paces Steve put them through. Training started at the end of February and involved a combination of indoor and outdoor training.

The team, which was led by Head of St Giles Hotels Abi Tan, was trained at YMCA Club (when not outdoors) and the money they raise will be going to Y Active Children’s Bursary, a programme that provides free holiday play schemes and afterschool activities for local underprivileged children aged five to 12.

“It was a tough course!” said Azidah. “The 11 miles track was hilly and winding, enough to drive one crazy!”

Azidah added that the team wanted to say a special thank you to Ms Abigail Tan for giving the them the opportunity to take part in the Tough Mudder challenge. “We were able to raise funds for a good cause!”

Experience what it's like to be a YMCA Club member and enjoy all day access to our fantastic facilities.